My Introductory Math students learned about parallel and perpendicular lines this week. My wonderful math intern from Appalachian State University taught my students how to identify lines as parallel, perpendicular, or intersecting from graphs and equations. The following day I was set to teach my students how to write the equation of a line parallel or perpendicular to a specified line going through a specific point, but I wasn't sure how I was going to teach it. I knew my students were struggling with their algebraic skills and I was nervous about how they would learn the material if the algebra was getting in their way, although I didn't know how to teach it without this being an issue.... Cue Tuesday morning and a conversation with a former student.

On Tuesday morning during my Math FLEX session, I had a former student come by to get help in her current math class. She is currently working on transformations of geometric figures and she was struggling with rotations. In her class, they had been using the rules for rotations. I started by reviewing the rules with her, then showed her I keep track the different rules.  I could tell that this wasn't working for her. 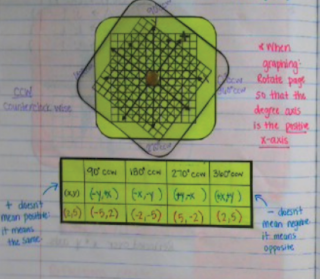 I decided to get out some graph paper and show her how to graph the rotations and from there she could come up with the image coordinates. All of a sudden her there was light behind her eyes, where there was once fear, and I could see the joy in her face. She saw how rotations worked and understood what it meant. It wasn't another rule for her to memorize, it just made sense.  I was elated for her and at the same time a little disappointed that I didn't start with the picture first.

How often do our students need to see something concrete, like a graph, before moving onto the abstract, like algebraic rules?   The answer is probably 99% of the time, especially for students have difficultly in math.

Throughout the day I kept thinking back to this student and how excited I was for her; not only for the knowledge she gained but that there was a simple solution to helping her understand.  All she needed was to SEE what was happening!

During my planning period on Tuesday, I realized I had to finalize my plans for writing parallel and perpendicular equations. It was Halloween and I was going to spend time with my nieces, so I wouldn't be home until late and I knew I wouldn't want to finalize my lesson plans once I got home.  I thought back to working with the student on rotation and I had an epiphany, what if I taught my students how to graph parallel and perpendicular lines before I taught them how algebraically find the equation?  It made sense in my head but I wasn't so sure it was the right thing to do, or that they would understand and see the connection. 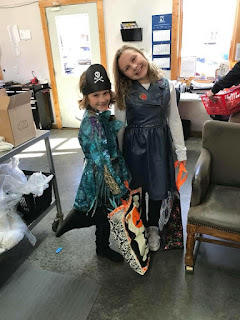 (My nieces dressed as Descendants Uma and Evie for Halloween.)

My co-teacher wasn't at school, so I couldn't run the idea by her. So I did the next best thing, I went down the hall to visit another teacher and ran my idea by her. She loved it and thought it would work.

Now, I just needed to figure out how to create a foldable for our interactive notebooks to include this new part of my lesson.  In the foldable I wanted to include parallel and perpendicular lines, writing equations by graphing and using algebra, and I wanted it to have an order to it. The teacher I was talking to suggested a flip book and I jumped on the idea. 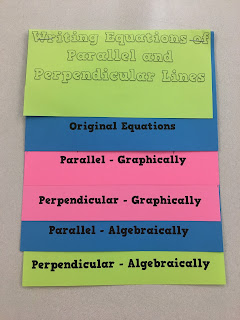 I knew that Kathryn had a template for a flipbook because I had used it before so I re-downloaded the template and whipped up a foldable. The foldable came together so quickly and I was excited that I had the time to think about it, talk it over with another teacher, and then create it before leaving for the day. However, I wasn't too sure how it would go over with my students.  I didn't know if it would make sense or if it would be too much at one time. 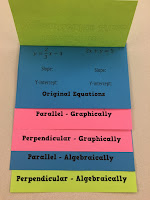 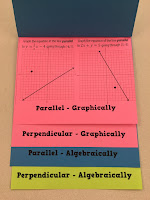 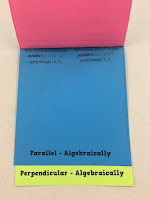 We spent the next two days on writing equations of parallel and perpendicular lines, beginning with graphing, then with algebra. It went amazing, so much better than I expected. This was the first time  that my students could write the equations of parallel and perpendicular lines after only seeing it a couple of times.  While students were practicing, I kept walking by my co-teacher and our interns and would say, "I just can't believe this; the students understand and can do it!" 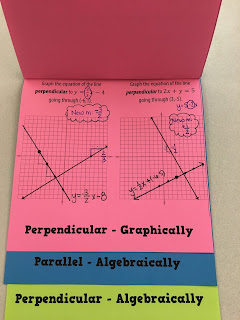 I'm happy to report that after two days of working on parallel and perpendicular lines, over 90% of our students had mastered this skill. I don't have the data from previous years but I can say without a doubt, it wasn't that high of a percentage of students nor was it that quickly. 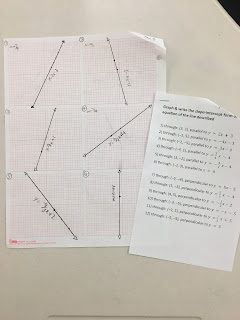 I'm so glad that with the help of a former student and fellow teacher, I was able to remember the power of a picture!

After tweeting about this experience, Tim Brezezinski replied with a link to a geogabra investigation on parallel and perpendicular lines. I plan on using this as one of my stations during our unit review next week!

Here are the links where you can download these files. Here's a pdf copy and an editable Word document. Graphs created with GraphFree.com  (Printing note: You will need to print on both sides of the page, flipping on the short edge.)